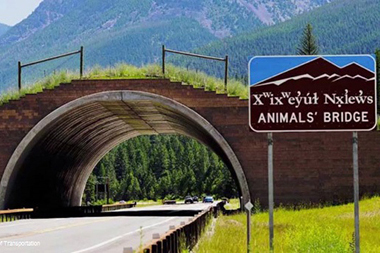 These New Animal Bridges are a Great Solution to Preventing Roadkill.

Every day, huge numbers of animals are killed on the roads after being hit by vehicles. With the sheer number of vehicles on the roads both day and night – cars, lorries, motorcycles and more – it comes as no surprise that so many animals fall victim and end up as roadkill. This is not just endangering animals but can also be very distressing for drivers and can cause serious hazards on the road.

With the high numbers of animals being killed on the roads, it was clear that action needed to be taken in order to provide protection for both the wildlife and for motorists. The development of so-called animal bridges or corridors appears to be providing an excellent solution to this problem.

How these bridges are helping

Wildlife crossing bridges and corridors are being put into place in destinations around the world including Australia, Asia, Europe, and America. The key aim of these bridges is to improve safety and protect wildlife. By strategically placing these bridges at key transportation points, a number of goals have been achieved. This includes:

The reduction of a growing problem

With more and more traffic on the roads, motorists driving at ever-increasing speeds, and vehicles getting larger and sturdier, the problem of wildlife endangerment and death on the roads has become a huge issue.

In the United States alone, accidents involving vehicles colliding with animals on the roads have increased by a massive 50 per cent in recent years. Not only does this have an impact on wildlife preservation and human safety but the costs involved are also huge. This is why rapid action has become such a necessity in terms of reducing these issues.

The problems with high traffic levels have caused a range of issues with wildlife over the years, including:

It is hoped that through providing safe, traffic-free crossings for animals, these bridges will help to eliminate these problems and allow wildlife to co-exist alongside increasingly populated roads without risk of death.

In areas where these bridges have already been erected, figures have already shown a steep reduction in terms of mortality levels for wildlife. This also naturally equates to increased safety for humans using the roads, as they are less likely to encounter a large animal such as a deer trying to dart across the road in front of them.

There are various different types of wildlife and animal crossings that are in use these days, which includes tunnels, corridors, bridges and overpasses. All of these have been designed to provide the same thing – increased safety to wildlife and road users. With these infrastructures, animals will benefit from a far greater degree of freedom on the roads without having to risk endangerment and death.